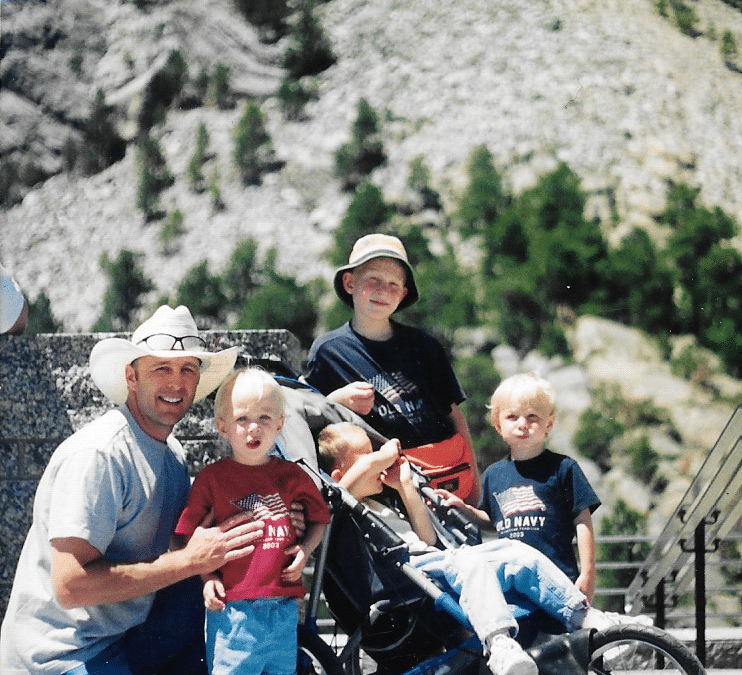 I love the movie RV with the late, great Robin Williams. For those that haven’t seen the film, it’s about a man who is desperate to reconnect with his wife and two teenage kids. Everyone is busy, going in different directions, focused only on their laptops and phones. So the dad rents a 35 foot Class A motor home and they take to the road for some “family time”. Everything that can go wrong does, and in the end, it’s the series of misadventures that brings the family together again.
I sometimes think this movie was inspired by my attempt at renting an RV and taking my family on a long road trip (long before the movie ever hit the big screen). My wife, Kristi, and I decided to rent a small motor home, pile our four kids into it and drive from Colorado to South Dakota to see Mount Rushmore. Just us on the open road, stopping where we pleased and camping where we pleased. We booked a campsite near Mount Rushmore for the week, but the trip out and back was unscripted. Just drive until we’re ready to pull over and camp.
With no planning to fall back on, as the first night approached, we ended up in an RV park / mobile home park / work camp. I kept expecting to see Chris Farley and his “van down by the river”. Actually, the fellow campers were very nice and we had a pleasant stay – it just wasn’t the post card moment I had envisioned.
The rest of the week went well, we saw all the sights and had a nice campsite near Mount Rushmore. But six people in a 25 foot motor home was starting to wear thin. And our cramped space was about to become even more uncomfortable on our trip home.
On the way back we dry camped at a site with no hook ups. We grilled steak and enjoyed a late evening campfire. But I wasn’t feeling too good. Some how I had contracted food poisoning. After the first couple rounds of intestinal cleansing it was obvious this was going to be a long night. Kristi abandoned the back bedroom to sleep on the couch in the crowded front compartment with all the kids. While I proceeded to crawl between the back bed and the bathroom every 20 minutes for the rest of the night. The bathroom was so small I could sit on the toilet and lean over the sink at the same time, which was good because I needed both simultaneously on a regular basis.
Then it rained and thundered all night. The rain was so loud on the RV roof; only eclipsed by my extremely vocal heaves. My wife says I heave loud on purpose and I can be quieter if I tried. I’ve tried! It doesn’t work. Just let it out I say!
As the night wore on, I began to notice the black tank was almost full. After every trip to the bathroom I’d check the tank monitor only to see the ominous red warning light indicating “She can’t take no more Captain!)
And Oh the smell! Six people crammed in 150 square feet. It’s raining so hard we can’t open windows. So I turn on the bathroom fan, which runs on the battery. Guess what happens when the RV battery gets low…the carbon monoxide detector starts beeping to let you know the battery is low.
So, to recap: six people; 150 square feet; rain and thunder; near over flowing poop tank, loud heaves every 20 minutes, an awesome smell and an alarm that won’t shut up! Will morning ever come?
Finally, at 6:00 am, Kristi gathered all the kids and went to the pay showers and proceeded to buy an hour’s worth of shower time just to have some where to be other than the crap storm on wheels. In the movie, there is a very funny scene involving RV septic systems, and the family nicknames their RV “The Rolling Turd” – I swear there must have been a Hollywood writer witnessing our trip and getting movie ideas!
Anyway, we finally rolled out of the campground and made our way to a hotel in Wyoming. That night a motel bed, clean shower and pizza were never so wonderful!
I share all this to simple say, I remember very little about Mount Rushmore or the camp ground in which we spent a week. What I and our family remember the most are the crazy campsites and the worst RV night ever – but we laugh every time we bring it up. I wouldn’t trade any of those experiences or memories – they are priceless.
So rent that RV. Go on that camp trip. Make plans. Don’t make plans. Expect some minor disasters. And treasure every moment!
Blessings,
Andy