A Father and Daughter Adventure Ride – Making memories and cultivating a life style. 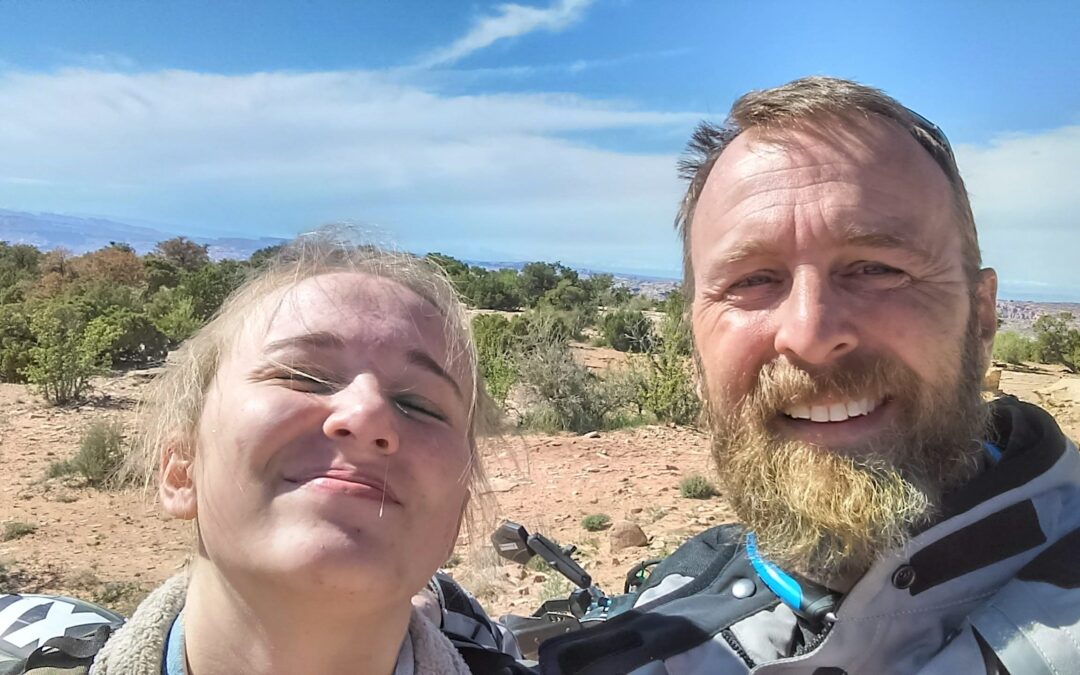 It’s March 2021 and there is a foot of snow outside my window. I won’t complain, we need the moisture. The unexpected snow fall did however alter my plans to go riding.  But the interruption gave me time to reflect on a dual sport adventure ride I was able to share with my daughter two spring times ago.

It was April 2019 and my daughter, Kaci, was nearing high school graduation and would be heading off to college in a few short months. I wanted to celebrate the occasion with a four-day dual sport ride through Western Colorado and Eastern Utah. Kaci grew up riding dirt bikes and was currently riding an old 1989 Honda XR250R she lovingly named “Hank”. Kaci had just gotten her motorcycle endorsement and it was the perfect time for a semi long-distance off-road adventure. Old Hank wasn’t street legal so she would take her maiden adventure ride on my Honda CRF250L.

On day one we headed out from our small ranch in Glade Park, CO. Kaci on the CRF250L and me on a DR-Z400. Both bikes were loaded down with gear, tools, extra fuel, and some overnight bags. We would be staying in hotels, so no need for camping gear. Glade Park is a rural community nestled in the foothills above the Colorado National Monument and Grand Junction, CO. The plan was to ride about 150 miles from our home to Moab, UT using only dirt roads, two-track, and on occasion, some very rural pavement. Part of the route would be on the famous Kokopelli Trail, an off road and overlanding jeep trail that connects Fruita, CO to Moab.

Just minutes into our ride, we entered the Colorado National Monument and began our 2,500-foot descent into red rock canyons on some beautiful twisty black top. I smiled with such delight as I followed Kaci, watching her lean into the curves while I simultaneously tried to catch a glimpse of the 500-foot red rock canyon only a few feet from my right foot peg! Eyes back on the road! It is amazing to me what beautiful country we live in. Some people will ride for hours or even days to reach beautiful destinations. We get to ride through epic landscapes from the moment we leave our home and every mile thereafter.

We dropped down into Fruita and topped off our gas tanks. The DR-Z four-gallon tank would give me about a 200-mile range, but the stock tank on the 250L would tap out around 126 miles. The one-gallon Rotopax gas container on the Honda would get us all the way, but it was easier to hit the fuel pump one last time before heading into the back country.

The first 25 miles was black top, but within minutes on the tarmac, we were riding through vast open country with no structures anywhere in sight. The nearby interstate soaks up most of the westward traffic so the old highway eases its way into dilapidation, with grass growing up through the cracks and asphalt crumbling away at the edges. It feels like you’re riding on an apocalyptic road in a Mad Max movie!

Soon we’re on the Kokopelli making our way west through the high desert. The route is a mixture of gravel, light sand, rocky out cropping and red dirt two-track heading through rolling hills and rocky buttes. About an hour in, I stop to check gear and see how Kaci is doing. Kaci was so excited. Just before leaving the pavement, we passed another rider coming from the opposite direction. The rider gave Kaci her first motorcycle wave. She now belonged to that group who explore on two wheels!

After a couple more hours we made our way out of the desert and up towards the La Sal Mountain range, but some late spring snows made the way look impassable, so we back tracked a little and made the last 45 minutes into Moab on black top. Not what we were hoping to do, but still a great first day of adventure riding.

On day two we decided to stay at Moab, leave our luggage in the hotel and explore the area via a day trip. I’ve ridden the Moab area many times and knew most of the places we were going, but getting to experience this ride through the eyes and excitement of my daughter made it new again. For two days we had ridden through such isolated and unpopulated areas that we joked about riding in the apocalypse. This led my imaginative daughter to create a running story line which we would dialogue in at each rest stop. It went something like this: “We were battle worn soldiers from the days of the rebellion. Now spending our days riding the desolate lands looking for survivors and trying to avoid zombies and marauders.” Just when I thought dual sporting couldn’t get more fun, my daughter added a whole new level of fun and excitement!

On day three, we loaded our gear onto our bikes and made our way north through the desert to Green River, UT. There were some descent gravel roads that would make the journey in a couple of hours, but we wanted to spend the day with more adventure so we stuck mostly to jeep trails with lots of slick rock features and sand. Oh, the sand! Kaci had done some sand riding before, but it had been on her much lighter XR250R. Now she was on an overweight, under powered CRF250L loaded down with gear and luggage. After several miles of riding the struggle bus, I could tell she was wearing down and getting frustrated. Finally, she dumped it hard in the sand. Years earlier, as a young rider, if she was struggling too much, she would have a pre-teen, drama-filled melt down right in the middle of the trail. But this time, maturity and years of learning to overcome hard things (many lessons learned on a dirt bike) produced a different result. She needed a moment to sit down, catch her breath and get her composure, but she worked through it and was determined to finish the ride. I was so proud!

Not too long after this we found some hard pack and were quickly making our way on easier roads. To make things even more rewarding, we stopped and talked to a lone rider who was from Canada. He was so impressed to see a young lady out there tackling the terrain; it really lifted her spirits. Plus, she thought his French-Canadian accent was pretty cool. With our new friend’s encouraging words, Kaci was raring to get back on the trail. We rode into Green River exhausted but riding a high that only adventure riders would understand. A big burger at the local favorite, Ray’s Tavern, topped off a challenging, but rewarding day.

Day four saw us heading home. We stuck to well-maintained gravel roads and some of the old highway we started out on and made good time. Not wanting to call it a day too early, we stopped in Fruita and made our way to a local favorite hangout with an outdoor vibe – The Hot Tomato – for some pizza before heading back up through the Colorado National Monument and home.

This trip was many things, including a great time of fun and bonding for father and daughter, some character building, and a chance to see dual sport adventure through the enthusiastic eyes of a young female adventurer. If this trip were nothing more than an opportunity to create some memories that Kaci would pull from her memory bank from time to time in the future, it would have been worth it. But I have been blessed in that this trip and other similar experiences have become so much more. This trip and other adventures have become part of her DNA and have encouraged a life style that is shaping her future. Kaci is in college now and is pursuing a degree in Outdoor Education, with hopes of a career in an outdoor field – maybe even becoming an adventure guide someday. In fact, as I was writing this article, Kaci called excited to share that she just finished top in her class as a certified Wilderness First Responder.

The opportunity for a parent to create lasting bonds with their kids and help shape their worldview in the outdoors is invaluable. I’m so grateful that some of that has been accomplished from the back of a dirt bike!

About the author: Andy Hanks left the corporate world in 2017 to be a stay-at-home dad for an adult special needs child and establish RockyTrax, an outdoor adventure company providing camper, overlanding, and dual sport rentals, as well as base camp lodging, off road riding lessons, and self-guided tour support. His wife, Kristi, and their four grown kids all enjoy the outdoor life-style. Learn more about their adventures at www.rockytrax.com.