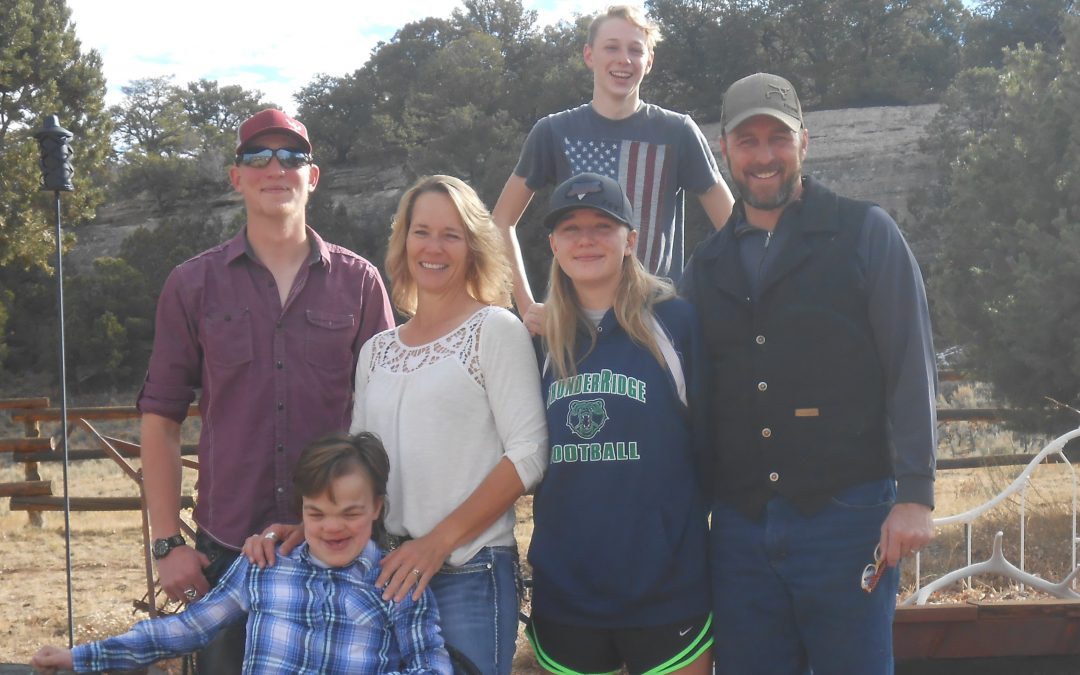 Gavin, our oldest, kind of started this crazy journey by being the first member of our family to have an interest in dirt biking. Having grown up on ranches my whole life, I was partial to horses, but when we moved from town to the country, I knew we would be taking our four kids away from friends, social activities and sports, so I agreed to buy him a dirt bike when he was about eleven.  He quickly graduated from a used 80cc two-stroke to a CRF150 that suited his trail riding activities perfectly. A big fan of Louis Lamoure western novels, he would often ride alone into the mountains above our place (sometimes on the 150 and sometimes a horseback) just to sit down, make a fire, and have a cup of coffee.

Kaci Rae (not next in age, but next in the line of dirt biker kids) was a natural student, worked hard in school, and was rewarded with praise from all her teachers. Dirt biking was a different story. Oh the trail side pre-teen drama-filled melt downs we had standing next to a tipped over XR100. Dirt biking did not come easy and it was so hard for her to continue with something that didn’t come naturally. Those were great father daughter moments where I learned how to keep my cool and she learned how to push through to success. Today, she rides an old 1989 Honda XR250R that she named Hank. I’ve tried many times to buy her a new bike with electric start and better suspension but she wants Hank – duct taped seat and all.  Now when we trail ride, instead of loafing along and waiting for her to keep up, I’ve got to stay dialed in and on the throttle just to keep up with her.

Isaiah was born 15 minutes after Kaci, but it may as well have been 15 months. He was much smaller and slower to develop than his twin sister. Small for his age and more academically challenged than his sister or his peers, he was a very insecure child. As a parent, it was painful for me to watch this lack of confidence slowly become the narrative of his life. Then one day Isaiah straddled a little XR70. It was meant to be. Suddenly there existed a world where he excelled and was in control. Quickly moving onto an XR100, he could go anywhere the adults wanted to go on their big 400s. Now with some age, maturity, and a ripping two-stroke Beta 300 Xtrainer, he has definitely come into his own identity. His 5th gear wheelies are both terrifying and thrilling to watch! With his speed, he could easily take the lead on trail rides, but ever the gentleman, instead he usually stays in the back to make sure no one gets left behind.

Kassidie is actually our second oldest, but due to her developmental disabilities, will never be able to ride a dirt bike. Because of this, she and her mom would have to stay home or remain at camp. Finally Kristi said “I want a four-wheeler so Kassidie and I can come to!” So we got a nice Can-am with two seats a little helmet and a safety harness to keep Kassidie in her seat, and Kristi and Kassidie learned to be “wheelin” gals! Kassidie is non-verbal and people who do not know her often think that she is not very intellectually aware of her surroundings. Far from true! One time we were riding a very tame and boring gravel road. Then suddenly, Kassidie managed to get her helmet off and, while holding onto the strap, let the helmet hang across Kristi’s shoulder. We all pulled over, confused why Kassidie would do that. God blessed Kassidie with an incredibly communicative and expressive face. Without words, she was basically saying, “Look if we’re gonna ride this tame stuff, I don’t need this helmet!” So we strapped the helmet back on and found some side roads with bumps and river crossings; oh the hearty belly laughter that came from Kassidie! And the helmet stayed on!

This is our kids growing up and us growing together as a family. At one time, we had an orange KTM, red Honda, Green Kawasaki, blue Yamaha, and yellow Can-am.  We looked like a Skittles commercial coming down the trail. The kids are older now and gravitating in different directions and our time together on the trails are a little fewer and farther in between. But it’s this experience that has me excited to introduce the thrills and spills of trail riding and outdoor adventure to the next group of parents that may one day introduce the great outdoors to their kids.